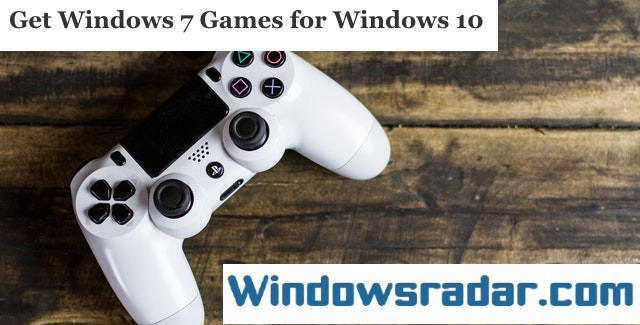 Get Windows 7 Games for Windows 10

Microsoft Windows made its base as it came with many pre-installed games but with the entry of Windows 8, most of the users were disappointed that all the games were removed from the system. On Windows 10, you just need to tap on the Solitaire icon to launch the game. Also, there was a game in Windows 7, called Minesweeper. This game is not installed on Windows 10 by default. You can install Windows 7 games on Windows 10 for free from Microsoft Store. You just need to search for Minesweeper and there you go with your game. Once you have installed the game from the store, you can access it by going to the start menu. There are plenty of websites to Get Windows 7 games for Windows 10. Once you search for them on the internet, you can find these listed for download.

Chess Titans is also a very popular game among the users of Windows 7. This is a 3D simulator for Windows. This game is also discontinued in Windows 8. We can still find the game on Windows 8 or Windows 10 computers.

We can Get Windows 7 games for Windows 10 Users of Windows 7 can install this game on Windows 10. This game comes with difficulty levels ranging from 1-10. Here you can see excellent AI skills. The first level is perfect for beginners. Going ahead, the last level, i.e. level 10, is very challenging. Many other games are similar to Chess Titans, but the graphics are not that good. In terms of AI or graphics, Chess Titans excel all other competitors.

The next one is a card game,

This is a card game and is a very popular game as it came installed by default in Windows 7 and also the older versions. This game has nice graphics. This game has the feature to automatically change the colors and also the alphabet and numbers in descending order. Also, this game features a help function, which makes the freshers start, who don’t know where to start the game. This is the best option to start if you are looking for an advanced version of a card game.

This game is available for free to download both for 64-bit and 32-bit versions of Windows.

We can install Windows 7 games on Windows 10 from the Store and also on different websites.

We have the ‘Minesweeper’ in the next place.

This game is also a very popular game for Windows 7. We can install Windows 7 games on Windows 10. In this game, avoid the mines in the squares and find all the empty squares. If you clear all the squares in the minimum time, the score you get will be higher. They set the mines in the game in positions, so be careful when you play for the first time, you will get trained after some attempts of the game, More the game you play, More the skills you develop on how to get the squares cleared.

One of several popular board games around would be Internet Checkers. It’s played on a 64-square frame, but it only uses half of the squares because you only play upon dark squares. There’s one player with red pieces, also with white pieces. Red always goes first, and for the rest of the match, you swap moves. This game was also pre-installed in Windows 7, but in later versions of Windows, they discontinued it. We can Get Windows 7 games for Windows 10. It is still playable in Windows 10. It provides you with various keyboard shortcuts that can ease your gameplay.

You have various sources to Get Windows 7 games for Windows 10, consider them wisely.