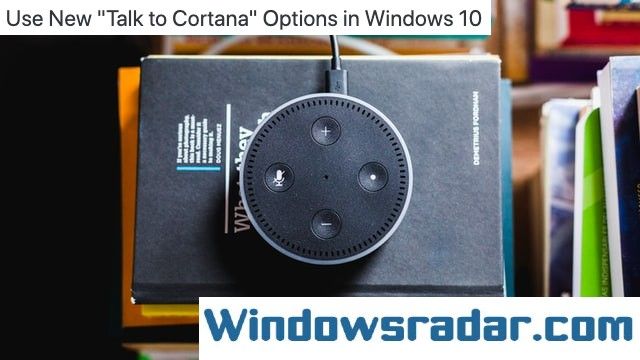 In windows 10, you often get many updates. One of the latest updates we have witnessed in Windows 10 is “Fall Creator’s Update,” where Cortana’s voice has been improved. Before updating Windows 10, while activating the Cortana, we speak the words ‘Hey Cortana,’ Later, we give the command and make our things done. Now there is a feature, ‘Fall Creator’s Update, where there are options like Talk to Cortana, and there are also numerous features that can make your PC better.

How to Chat with Cortana In Windows 10

There are new features in Cortana settings, which you can use it. When you think you want to talk to Cortana more, you can use the latest features by clicking on the Cortana bar. To see the elements, you can click on the Settings cog.

In any case, if you cannot see the Cortana bar, which means it, is somewhere hidden. To show Cortana on the taskbar, you need to follow the instructions below. 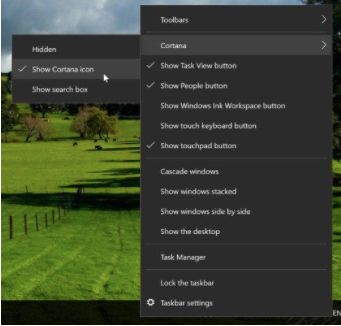 Hence, you will be able to open Cortana and get to know the new features of Windows 10.

After opening Cortana, you will get numerous categories. To enjoy the feature of speaking to Cortana, first, you need to select the Talk to Cortana option on your computer.

In the talk to Cortana category, first of all, you will see the option of Microphone. In Microphone, you need to check it to assure that Cortana can hear you. If Cortana can listen to you only, then you can command her to follow the orders you have given her.

Click on the Check the Microphone and make sure that Cortana can hear you as only then it can follow what you are telling her to do.

The next option you get in talk to Cortana is Hey Cortana.

You can uncheck the box ‘Keep my device from sleeping when it is plugged in so that I can always say ‘Hey Cortana’ (before I turn it off myself).’

If you know, then you have noticed that Cortana takes up your battery in a considerable amount. If you are using Cortana, it makes sure it consumes your battery. To save the shower, you have given two options, where you have to choose between whether Cortana should respond when anyone says ‘Hey Cortana,’ or it should only respond when you say ‘Hey Cortana.’

To have a chat with Cortana in Windows 10, you should know it is the battery consumption. To save the battery, you can choose the ‘Try to respond only to me’ option, where when you will say ‘Hey Cortana,’ she will respond to you only, and she will follow the instructions you are giving her. 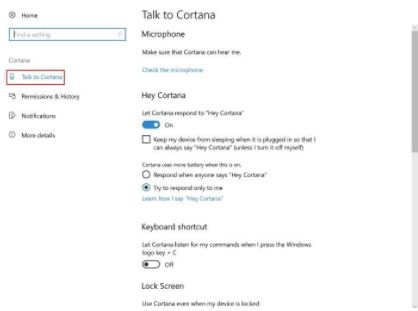 In any case, when you want to have a chat with Cortana in Windows 10 and you don’t have to command it with your voice, or you don’t want to turn on the Cortana by saying ‘Hey Cortana, then in that scenario, you can use the Keyboard shortcuts. To turn on or off the keyboard shortcut option, you need to set up the toggle switch of “Let Cortana listen for my commands when I press the Windows logo key + C.” That means whenever you will press the windows key + C, Cortana will respond to you if you switch on the toggle of the option. There is a suggestion that you don’t use the keyboard shortcut, as, through these shortcuts, anyone will be able to use your Cortana in Windows 10. If you want no one to have a chat with Cortana in Windows 10 except you, you should not switch on the option’s toggle.

The last option is the Lock screen. If you want to use Cortana in Windows 10 when locked, you need to switch on the option ‘Use Cortana even when my device is locked’ option. Using the option if you will instruct Cortana while your screen is a lock will respond to you.